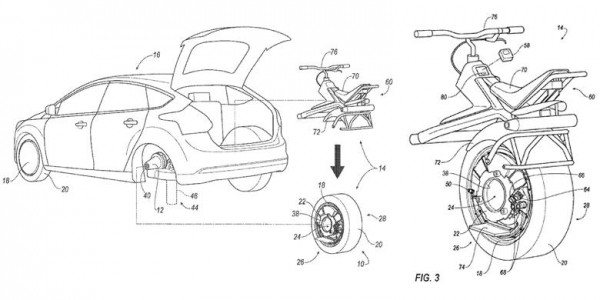 On the website of the patent and trademark office (USPTO) was a patent published under the number US 9,211,932 American Ford company, the application for which was filed back in June 2014. According to the document, the company received intellectual property on a modular vehicle concept – electric unicycle that can be embedded in the design of the car.

On the idea of American engineers, the rear wheel of the car will be to combine the battery, motor and gyro in one node, which can be separated from the car and attach it to the chassis axis of the unicycle. The chassis will be stored in the trunk of a car.

In the text of the document details the procedure for removal and installation of the unicycle (automatic vehicle jacking and wheel removal flick of the wrist is also designed). Also has a version, which for the operation does not require additional chassis.

Assume that you use the unicycle will be as an extra vehicle for driving on tight streets or inside large shopping malls.